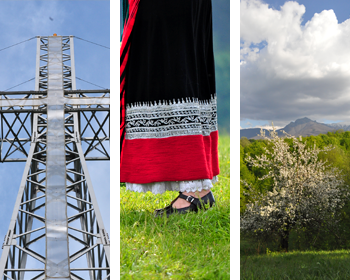 Apriltsi is situated in the heart of Bulgaria, a picturesque valley, nestled on the northern slopes of the Balkan Mountains. Apriltsi is a mountain resort, which offers wonderful opportunities for recreation, tourism, fishing, mountain biking, horseback riding and more. The valley is surrounded by wildlife Dzhendem, Mount Triglav, the highest mountain peak Botev / 2376 m / and Maragidik. At the foot of Stara Planina peaks alternating wooded slopes, hills, meadows, cut by the curves of river Ostreshka, Vidimska and Zla reka.

The town is ancient and with a rich history. The first residents of Apriltsi are migrants from Turnovo region - rebellious boyar families or refugees after the Turkish invasion. But these lands were inhabited many centuries earlier - evidenced by the remains of Thracian settlement near the entrance of Rusaliiski Road.

The town is known in Bulgarian history with the heroism of people in the region during the April Uprising / 1876 /. In April 1876 the triumph of nine days in freedom was set by proclaiming the Republic of Novo Selo. For the daring the mountaineers have paid with their blood and burnt buildings, including the Nun Monastery at Novo Selo and the church. Grateful heirs by celebration of the 100th anniversary of the April Uprising create today's town of Apriltsi which is formed by 4 villages - Novo Selo, Ostrets, Vidima and Zla Reka.